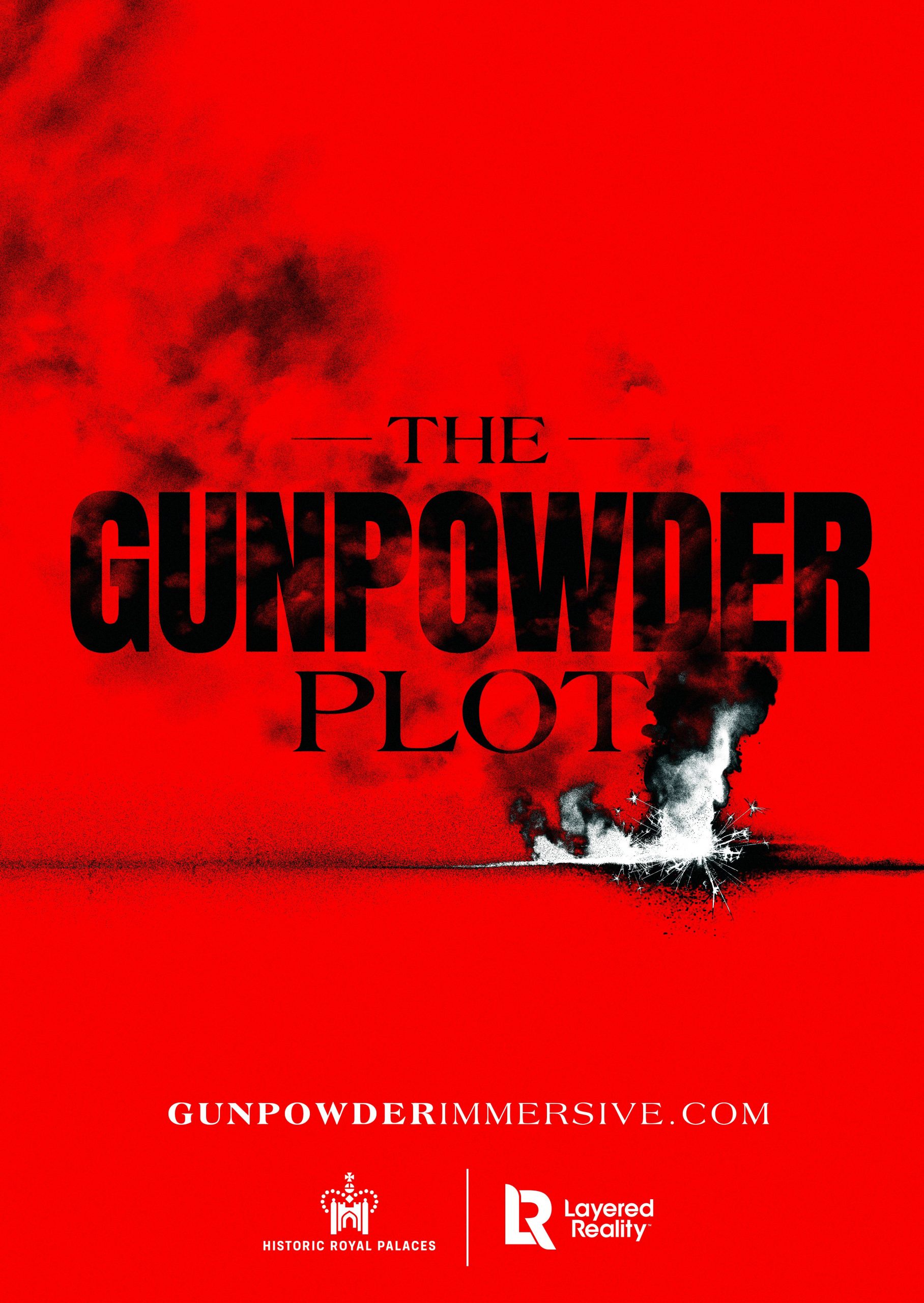 Tickets on presale from 16th November

A thrilling new Layered Reality™ experience is launching at the Tower of London on the 6th May 2022 and it’s set to be the biggest attraction to open in the capital since the Shard. Tickets for The Gunpowder Plot go on presale from the 16th November 2021 via Gunpowderimmersive.com. Customers can sign up for the presale from today.

Through this exciting experience in which live actors, virtual reality and multi-sensory special effects collide, audiences will step back in time to the Gunpowder Plot of 1605, where they have an active role to play in one of the greatest stories and adventures in British history. The guests’ exhilarating mission is to infiltrate the plotters, earn their trust and then join them.

The experience takes place in a purpose-designed immersive theatre space in the Vaults opposite the Tower of London, last accessible to the public two decades ago, where much of the prelude to the Gunpowder Plot took place before Guy Fawkes’ torture and eventual death.

A cultural revolution has been going on with new operators providing location-based experiences, using technology, in a far more immersive way than traditional theatre. Leading this new form of entertainment is the award-winning company Layered Reality, formerly known as dotdotdot, who have delivered more than 250,000 VR experiences and transported 60,000 people back to 1898 in their critically acclaimed Jeff Wayne Musical Version of The War of The Worlds: The Immersive Experience. The event won the prestigious THEA Award (dubbed the “Oscars” of the entertainment world) and is among the Top 10% of attractions globally according to TripAdvisor. The company are also the creators of 2018’s multi-award-winning lucid dreaming experience SOMNAI.

“So when you’re stepping back into 1605, all of your senses are telling you that you’re there,” says Layered Reality CEO Andrew McGuinness of their latest adventure. “Your eyes are seeing London as it was in 1605, you get the smells, you will for the first time see the Tower of London how it looked in 1605, and you’ll go down the Thames and see it as it was at that time. That’s what makes it so magical.”

It’s the added elements of cutting-edge technology and the multilayered approach which make this so exciting in comparison to other immersive events, says Hannah Price. What VR enables is the creation of worlds that we could never go into; you can’t recreate the streets of 1605 London in any other way.

“We’ve made a completely 360 environment: amazingly beautiful sets, incredibly detailed extra layers: does it smell right, do the textures feel right? You can look around, you can feel the wind in your face, you can feel the change between going inside and outside – everything about this is a multilayered experience so you’re going to feel like you’re there.”

It’s also exhilarating, because instead of just observing and seeing how the action unfolds, you become a participant in that extraordinary set of events. This is your chance to step back into history and experience it. Since the pandemic for many months put a halt to in-person entertainment and socialising, people now want more than ever to come together to experience something memorable.

“It’s going to be completely unforgettable because you are right in the heart of the story,” says Price. “You get to go undercover in the most infamous plot in history and you are at the centre of it and absolutely active in finding out what is happening and meeting all those famous players that were part of that extraordinary period of history. It’s right at the frontier of technology – we’ve used all the innovations that we can to make that feel as real and amazing as possible. So we’re pushing boundaries in that sense as well, integrating that technology within the theatrical setting. ”

In an age when people passively consume culture on demand, streaming music and television online, this new immersive project is an antidote to that but in the most modern of ways that will appeal to audiences across the generations. “This is a very progressive, dynamic, exciting way of doing theatre and I also feel like what we are delivering is an age-old classic story, but we’re delivering it in an incredibly accessible, explosive, exciting 21st century way,” says writer Danny Robins. “It’s like somebody made a brilliant movie version of the Gunpowder Plot and it came to life around you and exploded in your face with bits of Jacobean London flying at you.”

It may be an age-old story, but the themes remain remarkably relevant today. Telling the tale of a country divided with Catholics against Protestants, as society was recovering from the plague and fearing the next outbreak, the story features parallels with today’s Brexit and Covid-19 that are all too resonant – particularly the sense of people having to choose a side.

“This is a story about activism,” says Robins. “It’s about trying to change the world but realising that you’re trying to do that in possibly the wrong way. It’s about young people finding themselves in a situation that they can’t get themselves out of.”

The historically accurate depiction of the city and events is overseen by Alden Gregory of Historic Royal Palaces. Everything has been meticulously researched by Gregory down to how people would have sworn in Jacobean times.

It may be unusual to have a curator within a theatrical team, but Gregory’s role, within the challenge of enabling the creation of a whole 360-degree world in virtual reality, is much the same as it would be for an exhibition: to ensure that the experience is true to history and creates a sense of authenticity and understanding of what the past looked like.

“We’re pushing things to a whole new level, doing something that hasn’t been tried by museums before,” said Gregory. “We’re telling a story in an interesting new way, exploring new technology with new partners. Ultimately my role is making sure that what we do will be rooted in its history and in a sense of authenticity. We really want people to feel that they’ve been in 1605. It’s to make that experience as real as possible.”

That includes shifting away from the stereotypes of a filthy London swilling with sewage and animals running around, or of crumbling buildings and decay. “We’ve all seen computer game graphics that give an impression of what medieval London might have looked like and we want to challenge that and create a much more realistic version of the past.”

Guy Fawkes and other Gunpowder conspirators were imprisoned, tortured and interrogated in the Tower of London. Telling history where it happened is a key aim of Historic Royal Palaces. “It brings a whole other dimension,” says Gregory. “You can descend in the vaults and actually travel back in time to a version of London that people haven’t ever experienced in quite this way. It’s going to be hugely exciting. We want to give people the sense that they might have time travelled through this show. I think it will feel very authentic with those experiences of joy, confusion and fear that the conspirators felt.”

The challenge in creating the experience lies in simultaneously creating an experience rooted in history and a thrilling night of entertainment that reaches a far wider audience than those drawn to historical buildings. Powell’s focus is the use of immersive technology in this show that goes beyond the limited virtual reality dabbled in by museums and attractions to date. It’s also a vast distance from watching reenactments which again offer a passive view of history rather than the sense of personal involvement.

“This takes traditional re-enactments a step further, putting the visitor right at the heart of the action.’,” says Powell. “The way Layered Reality uses the technology within the show is brilliant because it fools the body into telling the mind that you are physically there, that those characters are speaking to you directly and that encourages the belief that you are both present and able to influence the history that’s happening around you. It’s a fundamentally new way of experiencing history, because you’re not just witnessing it but actually participating in it for the first time. The multisensory elements form memories that will really feel real.”

That it’s a cleverly plotted theatrical narrative also helps it become “not a cold learning exercise, but rooted in that emotional journey, with hopefully peril and fear and a bit of laughter.”

Above all, it’s an experience that will be awe-inspiring for the most jaded of viewers. “We live in an age when we don’t get that shocked or excited about things anymore, we’ve seen it all, we’ve got endless TV on offer on Netflix, but I still think VR has the ability to shock and surprise,” says Robins. “It’s this brilliant disorientation reassessing your whole view of the world. This is the immersive experience I would want to do. It’s such an exciting story, and we are doing it in a way that is going to feel incredibly fresh. You are literally in the Gunpowder Plot. What could be better than that?”

Arriving after many months of people being starved of entertainment during the pandemic, this thrilling new experience is needed now more than ever. McGuinness explains: “When the Shard opened it offered a view of London that you’d never seen. What we’re offering is a view back into the London of the past that you could never have experienced. I think people want new memories; people feel like they didn’t form memories for a while, or they were negative. They also want shared experiences, to come together with others. And they want to escape, to step into another world and be something different. This allows them to do that.”

The Gunpowder Plot opens May 2022 in Tower Vaults at the Tower of London. Tickets go on general sale on 19 November. Register for the presale at gunpowderimmersive.com before 1pm on 12 November for an exclusive presale discount worth £10 and a chance to win VIP tickets*. Presale tickets are available from 16 November.