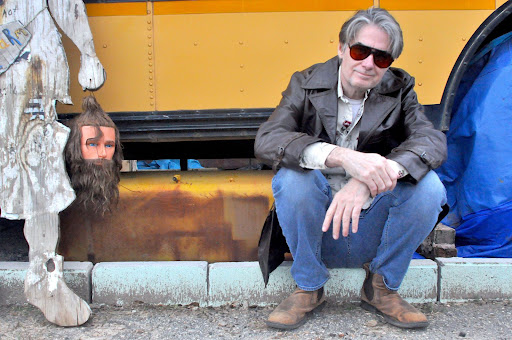 His most upbeat, hallucinogenic record to date, upon its release in 2020 ‘Misfit’s Jubilee’ was hailed by UNCUT as “the friskiest, most rock’n’roll album of his career” (8/10), while MOJO effused that “the timeless fury of these songs is just what we need more of right now” (⅘).

Fast forward to 2022 and White will be bringing its songs to the live stage for the first time. Performing as a three-piece band, the Georgia native will be joined by Geert Hellings and Nicolas Rombouts, both of whom played on ‘Misfit’s Jubilee’.

Kicking off at The Cluny in Newcastle on 12 June, the ten-date tour will see the band taking in shows at Glasgow, Manchester, London, Birmingham and beyond. With tickets on sale now, full dates and details can be found as follows:

Known for his catalogue of dark ruminations on all things Southern, White’s latest outing, ‘Misfit’s Jubilee’, features a nonstop parade of manic, blue-collar conflagrations exploring realms dark and light, mystic and mundane, cynical and heartfelt; all presented within a buoyant, hook-laden sonic framework.

Recorded primarily at Studio Caporal in Antwerp, Belgium, the record marks a departure from White’s usual hopscotch approach to collaboration—no bevy of celebrated guest artists and studios scattered across the globe this go-round.  The album was written with just multi-instrumentalist White, his longtime drummer Marlon Patton, plus trusted Belgian sidemen Geert Hellings (guitar/banjo) and Nicolas Rombouts (electric & stand-up bass/keys), and the pared-down chemistry on display here lends ‘Misfit’s Jubilee’ a sonic integrity that far exceeds any of White’s previous efforts.

‘Misfit’s Jubilee’ draws from an array of original songs penned by White over the span of several decades—scattered among the recent compositions are songs back-burnered in previous epochs by White’s major label handlers, this after said songs were deemed too extreme for his “brand”. With no such middleman constraints this go-round, in ‘Misfit’s Jubilee’ White has found the perfect vehicle to unleash his twisted take on southern folk rock.

Following the album release with a book of anecdotes from his many eccentric and varied careers to date, White will be promoting “Incidental Contact” at his upcoming UK shows, with copies set to be available at the merch stand.