Home » Music News » CAN YOU CIC IT? launches venn21 bringing young people together through music – supported by Youth Music

CAN YOU CIC IT? launches venn21 bringing young people together through music – supported by Youth Music 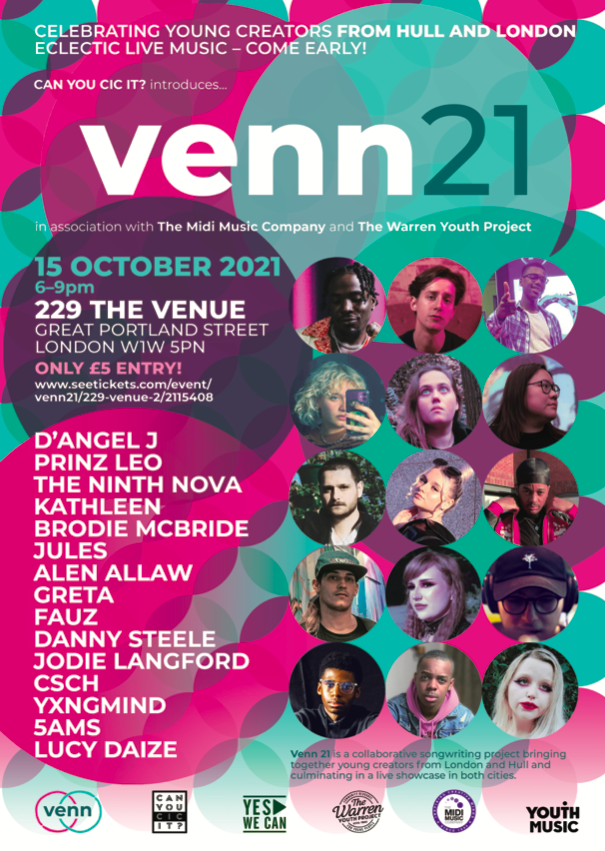 CAN YOU CIC IT?, the organisation delivering Independent Venue Week in the UK, this week announced the first ever live performance of its new venn series, venn21 supported by Youth Music.

venn21 brings together young people from The Midi Music Company in Deptford and The Warren in Hull to share, inspire and create new music together.

Starting online and followed by two weekends across the summer 2021, one in each of the partners hometowns, young people from both organisations were brought together to share their music passions and local culture and explore those of their hosts.

Each weekend saw around 18 young people supported by mentors from both organisations, immerse themselves in collaborative song writing, rehearsals and ‘spin off’ side projects.

“I feel honoured to have experienced everyone pouring their soul into the tracks created within the project and I really feel like we’ve made something special” – Jodie Langford, Hull

Between the in-person weekends, the artists continued to develop online and hone tracks they had written together, and these tracks will be performed live for the first time at two shows, one in each of the organisations’ home towns.

“venn21 brought nineteen talented young artists and producers from London and Hull together to collaborate – writing, rehearsing and recording some terrific music. The energy levels have been tremendous, and the work they’ve produced is absolutely first rate! We can’t wait for the live performances and it’s been great working with the Can You CIC IT and The Warren crew, as well as being a real privilege to work with these young creators.”

“The Venn project has been a whirlwind of creativity, allowing young people from across the country to quickly make bonds and start creating quality music with one-another under tight time frames. Nervousness and anxiety quickly dissipated and turned into intense writing, composing and practice sessions. It’s been an absolute pleasure to watch all the young people involved work so hard and produce some amazing original music.”

Sybil Bell, Founder at CAN YOU CIC IT? explained –

“From the moment we stepped foot through the doors of The Midi Music Company back in October 2019, we knew there was a HUGE opportunity to bring the amazing young people there, together with the brilliant young people at THE Warren in Hull, an organisation we’ve known since 2015.”

“We worked with the young people and teams in Deptford and Hull to design a project they, and we, felt would be inspiring, creative and lead on to further personal and professional development opportunities. The support of Youth Music has enabled us to deliver the project and realise the potential of some incredibly exciting young musicians and producers, for which we’re very grateful.”

“venn21 has been an inspiring project for an artistic connection and growth, there’s so much beauty in collective creation” – Lucy Daze, London

The culmination of the collaborative project will see two live performances, the first in London at 229 London on Friday 15th October and the second in Hull at The New Adelphi Club.