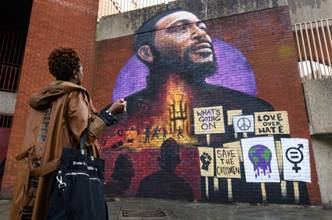 UK visual artist Dreph has today unveiled a giant public mural in Brixton, London, as part of the global celebrations to celebrate the 50th anniversary of Marvin Gaye’s timeless album, What’s Going On.

The stunning 16-foot piece pays homage to the 40th anniversary of the 1981 Brixton Uprising – a watershed moment for race relations in the UK. Growing tensions around racial inequality erupted into violent clashes between the predominantly Black youth of Brixton and the Metropolitan police force. The uprising was sparked by the same police violence and injustice that Marvin Gaye sang about in What’s Going On. The riots took place over three days, devastating the community and injuring over 300 people.

Dreph’s art represents the musical message of What’s Going On, which still held its significance amongst police brutality and racial inequality in 1981 and continues to encourage today’s social justice movement. The picket signs reference the lyrics from the title track and words taken from the album’s song titles within the piece. The symbols represent contemporary movements campaigning to address the climate crisis, gender inequality, and world peace.

On the mural, Dreph said: “It’s an honour to make artwork in celebration of such an iconic album, from such a legendary artist. It is disappointing though, that many of the lyrics of the album are still so pertinent. This painting for me is a recognition of today, with hope for a better tomorrow”.

The making of What’s Going On is legendary. With his brother Frankie back from Vietnam and struggling to find a job, the Earth showing signs of ecological distress, police brutality at a protest in Berkeley, and a boiling point of inequality in black urban neighborhoods, Marvin Gaye wrote a poignant plea that we might organize to address these often-overlooked issues. Fifty years later, the influence and meaning behind one of R&B’s first seamless concept albums, What’s Going On, continues to ring true. Calling out to a broken country, Gaye searched for reason and hope in a world that felt desperate and senseless. He opened the door musically, culturally, and politically for countless musicians over the last five decades to address, with a vulnerable depth and complexity, the injustices of our world.

Dreph‘s involvement in the UK is part of the global activities to honour this momentous record and celebrate Gaye’s life and legacy, Motown/UMe are introducing, today (May 21, 2021), exactly 50 years from the album’s original release, a charge of releases that both conserve and reimagine the essence of What’s Going On.

Listen to What’s Going On here

Representing the younger generations, soul-stirring R&B virtuoso Jac Ross (Darkchild/Island – bio) has released a cover of “What’s Going On” (View here) Ross has quickly made himself known in the R&B scene with his single “It’s OK To Be Black” and has built a buzz around his electric live show and his ability to connect to listeners through his songs. Highly influenced by Gaye and striving to carry on the messages of struggle, perseverance, and cultural change, Ross’ cover honours and preserves the track’s original atmosphere while imbuing the weight and emotion of today’s social climate. “Honestly, I would rank What’s Going On as one of the best pieces I’ve ever heard,” says Ross. “It holds substance and has charisma all at the same time. To me the album is a socially conscious project. It’s what Marvin sees, being converted to what he says in real time.  Even when we fast forward into the present, this piece of work holds the same impact. The project inspired my career in many ways, one of which is simply making a real effort to speak out when the time is right.  Another thing I’ve learned from watching Marvin’s career is that you can be versatile. You just simply must pay attention to what the world is telling you in that moment.”

One of the most influential and successful people in hip-hop for the past several decades, Young Guru, is announcing his “What’s Going On” remix to be released in June. A Grammy-winning engineer for Everything Is Love by The Carters, Young Guru has worked closely with genre-defining artists (bio). With What’s Going On as a driving influence for himself as well as the many artists he has worked with, Guru is developing a rendition of the track infused with the genres, grooves, and tones that Gaye’s work would go on to inspire. “My goal was to meld the worlds of where I’m from,” says Guru. “This record affected my father when it came out, but I also want it to affect my son right now with this remix. And for me, that’s the biggest thing, showing reverence, but also showing how it’s still effective today and how it still goes with the times today.”

Offering an option to explore the title track itself, Motown/UMe have released a new lyric video for “What’s Going On” featuring the captivating art of animator and director Tim Fox. There are also eight brand-new pseudo-videos released for the remaining tracks on the original record, each animated by a different artist to match the message and atmosphere of the song, delivering a dynamic visual complement to the listening experience. View the visual album HERE.

You can also catch the Apple TV documentary 1971: The Year That Music Changed Everything, covering the year in music and highlighting the release of What’s Going On, available today. Watch the official trailer HERE.

CNN has aired their special What’s Going On: Marvin Gaye’s Anthem for the Ages (first aired May 9, 2021) hosted by Don Lemon and featuring interviews from artists inspired by Gaye’s masterwork including Stevie Wonder, Smokey Robinson, Maxwell, Sheila E., Spike Lee, Lee Daniels and Capitol Records artist Devon Gilfillian, whose most recent release is a cover of the full What’s Going On album. You can watch the special on CNN VOD HERE.

Marvin Gaye’s What’s Going On continues to be hailed as one of the greatest albums of all time. It was the first of Gaye’s albums to break the top ten of Billboard’s Top LPs, spawned three No. 1 singles, at the time became Motown’s best-selling album, decades later earned the No. 1 spot on Rolling Stone magazine’s 2020 list of “The 500 Greatest Albums Of All Time.” Marvin Gaye continues to hold his place as one of the greatest singers, composers and producers in this half a century, and What’s Going On has proven that its timeless message and sound will continue to change the face of music for years to come.