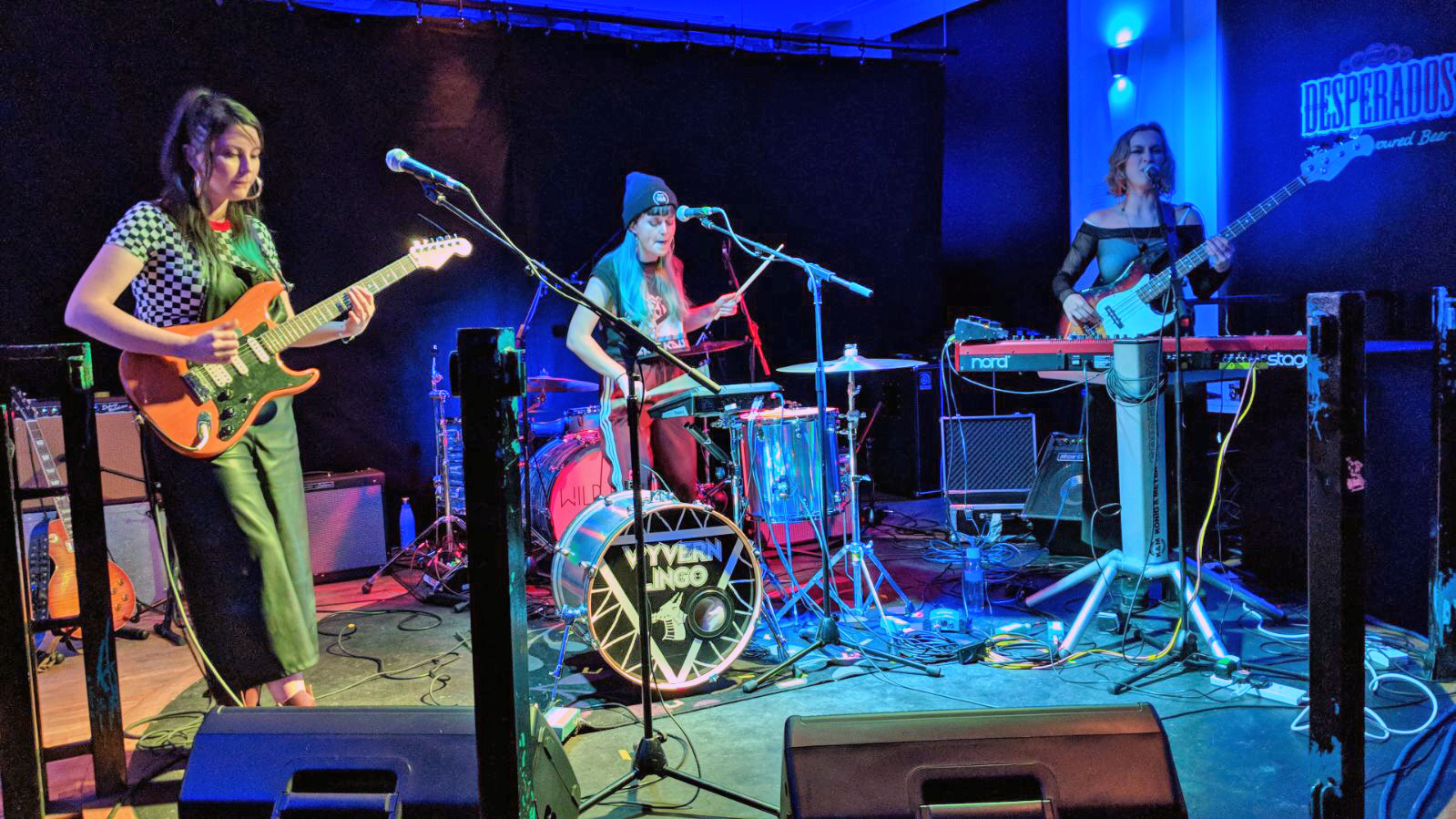 Situated in the cosy yet cool Library Bar at ULU’s student building, an evening of surprising yet brilliant musical talent ensued. Danny Starr kicked it off with enthusiasm and a keen crowd, unable to hide his smile as the calls for an encore quickly developed after his opening set. Following this warm-up act was Rothwell, executing a polished and yet soulful performance. The blonde Bristolian, noted for capturing something quintessentially British in her songs, hinted at a depth of music to come, with her recently released ‘Freedom’ prompting huge cheers from the crowd.

As Wyvern Lingo took to the stage, an excited hush fell over the room, the majority of whom seemed to have attended solely to watch this performance. The girls, each in impossibly cool 90’s style outfits and with proud smiles, opened with a dramatic rendition of their upcoming song ‘Used’. Intimate and haunting, this song ensured that every gig attendee was focused solely on the stage. Having secured our attention, the girls then launched into their set with evident joy. There’s something utterly delightful about watching musicians who so clearly love their craft – the passion on Karen’s face as she sang, the mischievous grin as Caoimhe drummed and the effortless confidence with which Saoirse strummed along to each track.

The standout song was undoubtedly Snow II, offering an emotional and stirring narrative to a hungry crowd. Written for an Ex “who’s in a bad place”, the lyrics of this track convey a feeling that we are all a little too familiar with – the confusion and pain of still caring for someone that you no longer share a life with. Ending their set with the already much-loved single, ‘I love you, Sadie’, the girls were simply having fun – with the crowd singing every word and the girls unable to hide their exhilaration. By the time Wild Front took to the stage to end the evening, the entire venue was abuzz with praise for Wyvern Lingo’s stellar performance.

The band credit their album with standing testament to their identities; as song-writers, musicians and primarily, old friends. “Sincere” is offered as a word to sum up their upcoming album, due to be released on February 23rd of this year. “This album really speaks for who we are”, Karen explained after the gig, with Saoirse adding that it represents years of hard work and passion.

It’s clear to see in their performance that these girls are singing on a solid foundation of friendship, with years of gigging in Ireland translating into pure ease on stage.

The name ‘Wyvern’ conjures images of a mythical beast and yet does not fully convey the power of this Bray trio. It’s clear to see in their performance that these girls are singing on a solid foundation of friendship, with years of gigging in Ireland translating into pure ease on stage. Blending musical genres with a hint of 90’s nostalgia, Wyvern Lingo’s upcoming album is an exciting offering of musical talent, edgy vibes and witchy lyrics. The band’s love for song-writing, alongside the guiding hand of producer James Kelly, has produced an album set to be your 2018 staple.

The track ‘Tell him’ promises to be on your February favourite’s playlist, the perfect antidote to winter blues. If you can, make time to go and see Wyvern Lingo as they tour Europe. You’re sure to leave the evening beaming, and perhaps with the overwhelming desire to order some chic oversized earrings to truly feel ‘part of the band’.